Home » Universe » How is the history of the DESCENDANTS universe connected with the gameplay?

How is the history of the DESCENDANTS universe connected with the gameplay?

The whole role-playing system is fully based on the realities of the universe of the last days. Classes, roles, abilities, weapons and so on - everything has its sci-fi explanation. This aspect is very important for us - the history of the universe and game mechanics are created for each other, there is nothing we would not have a reasonable answer for. If something is done correctly, the elements always converge into a single unit - otherwise it will not be interesting for an adult.

What inspires us in the gameplay explained in Lore

For example, a natural question arises: why do you lay such a big emphasis on close combat weapons in the distant future? The fact is that the future is so far away that the whole reality of descendants exists in a kind of condition shot through with paradoxes.

The paradoxes can be covered in a separate topic, as they seriously affect the role mechanics and battles making them really interesting. Melee combat in Descendants is superior in effectiveness to long-range combat just because of one of these paradoxes. 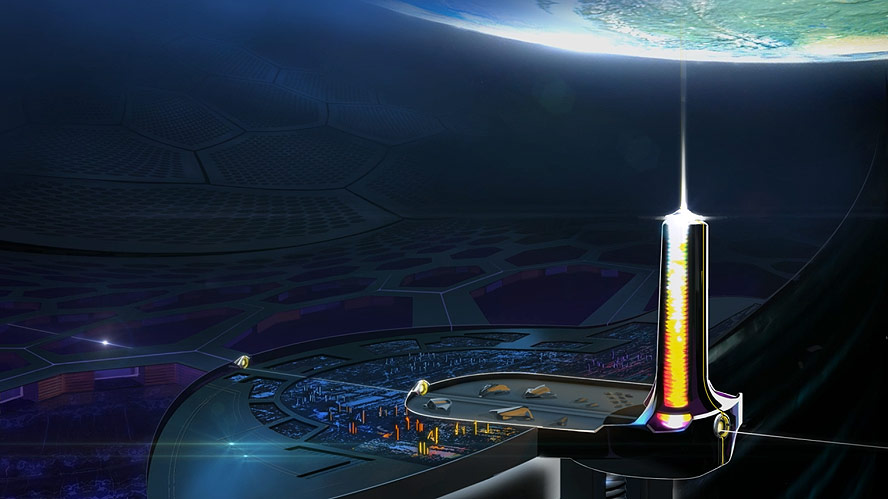 The fact is that nations of descendants are separated from each other physically so much, that even traveling at superlight velocity does not make them closer to each other.

The worlds of descendants are connected by certain zero space, put forth by chrono-engines bestowed by ancestors (but don’t think that the issue is about the banal reference to some mysterious precursors - everything is much more interesting, but it's a topic for another conversation).

However, descendants are divided not only by incredible distances, but also by the life time of their civilizations. Long story short, ancestors’ (in fact, the earthlings) technology allows connecting in the present moment everyone, who has access to the chrono-cores synchronized in one time (in fact, synchronization is not tied to the material universe, but subjectively align with the soul of the first of the immortal earthlings, and the most unique person in the universe, who, basically, makes impossible shuffle to zero space possible).

Instantaneous jumps into zero space allow disparate nations to have a common history, which resulted in creation of the Circle of law distinguishing relatively safe space from unimaginable inhabitants of the outer space (who, for the most part, have once been descendants).

Chrono-technology has ceased isolation of the nations, but exerted zero space connecting descendants in universal time has become the reason of the very paradoxial effects.

For example, the battle of representatives of different nations is possible only because chrono-jump one of the parties has become the cause of their meeting at the same place and time. Objectively, one of these nations has not even engendered in deep space in relation to another nation.

On the one hand, it is impossible to go to their planet at the speed of light and make sure, because the flight will takes millions of light years, and the nation, which has not yet occurred, will already be likely to die.

On the other hand, despite the absence of objective inconsistencies, that, in fact, allows chrono-jumping, matter perturbations lead to a partial manifestation of some temporary delays.

Long story short, zero space is a commodity of the technology of ancestors’ quantum super complicity, and criterion of reality of any phenomenon is personal perception and attitude of the effect participants, that is descendants.

Therefore, if a fighter is not objectively aware that he is being shot, for example, from behind, or he is sleeping at all, then the missiles do not reach him, in fact, simply disappearing from reality. So, close combat weapon has got the new birth after the unification of races into a single zero space. It is much more difficult to ignore the blade near your face, than a rifle shot from a distance.

Why did you have to invent a new universe? 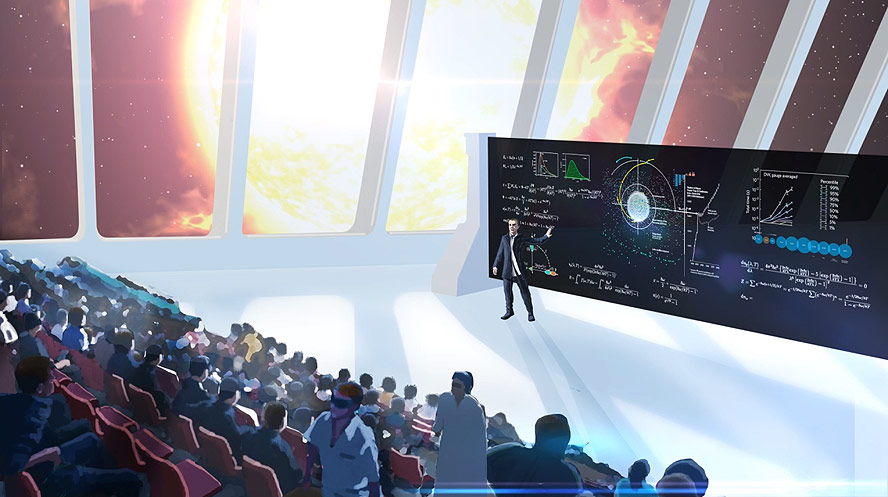 Close intertwining of the game mechanics and the context of descendants’ universe allows us striving to create a deep involvement in the gameplay. However, this is only an applied reason for existence of the entire universe – every game benefits from the quality of the plot.

The main reason for the creation of an elaborate setting has become our desire to move away from the typical clichés of science fiction, and meet up with something completely new and interesting. 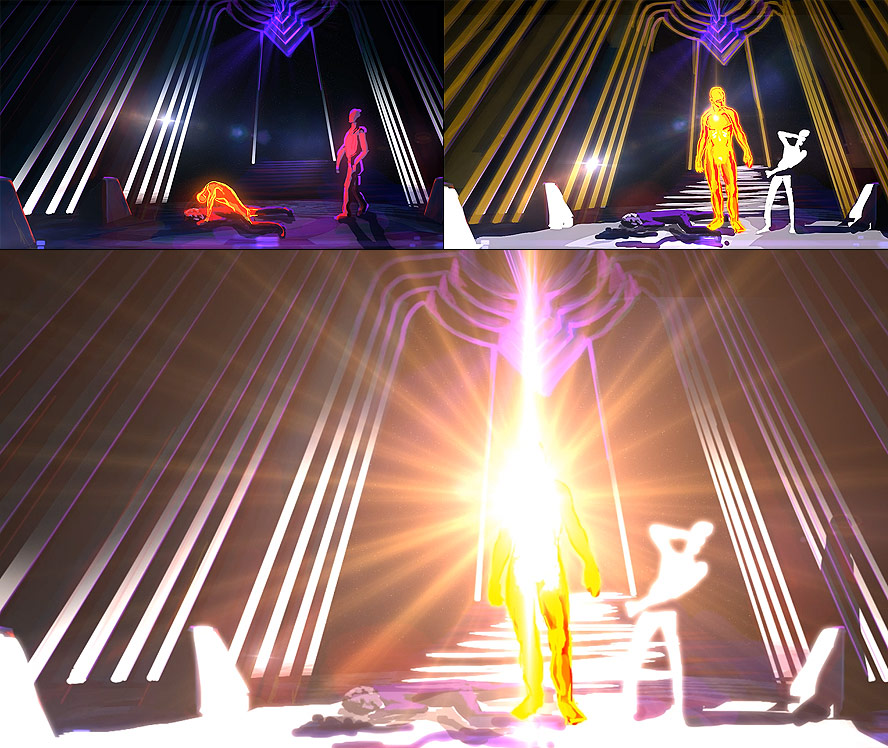 We all have hundreds of viewed fiction and fantasy films and dozens of books read under belt. In fact, all the problematics of the world of the future is clear, and there is nothing surprising.

The fact is that bonds of the genre are bonds for the possible ideas, so if we want to experience something new and inspiring, we must create entirely different launch environment.

Universe of the Descendants is based on the assumption of maximum extreme moment of human history, when people have to act here and now, as the possibility to postpone it until better times might not happen.

All we will see in the universe of DESCENDANTS goes beyond the conventional notions of fiction: the other archetypes of nations and social order, the other space ships, weapons and planets, the threats of an entirely different level, as well as the types of enemies and challenges.

Other relationships between people. DESCENDANTS is an attempt to understand the science fiction dialogue about what is beyond, at the limit line. However, regardless of how the scenery changes, human nature remains unchanged, while the person remains a person.

Therefore, the dilemmas faced by the descendants are faced by us too. Prosperity has not eliminated the problem of choosing between good and evil. Man rebels against forces trying to erase him from history. Even in the face of objective destruction of all people, there are the sources of salvation and hope.

The ideology of salvation of very different, but, nevertheless, understandable descendants races become the alternative to escape proposed by the ancestors. And, of course, interweaving of personal stories of the heroes of the universe is the core of the whole story and its ending.

Why DESCENDANTS will have a meeting with ancestors, how is it possible?

The world of descendants exists after dozens of billions of years from now. Humanity survived due to incredible efforts (some would say a miracle). And now it is facing heat death of the universe, chaos of matter particles and the end of time. For a while, people have been able to survive, escaping from the rising anomalous funnel that has swallowed up most of the universe. However, the escape can not last indefinitely.

Humanity is divided into two parts: the ancestors and the descendants existing simultaneously in different configurations of the universe. The ancestors are humans who have attained prosperity and faced quantum consequences of its state. Earthlings are in constant escape from the rising death.

Number of immortals earthlings is constantly increasing, and their bodies, immured in restrictive capsules, fill all available space once filled with life of terrapolises surrounding the Earth.

Home planet surrounded by disk orbital cities is the original foundation and source of energy for the huge spaceship - the ark of salvation moving toward the edge of the universe.

Ark is constantly accelerating. Distortion of space and superlight velocity are the reason of paradoxical shield of Alteorum covering the ark and endlessly increasing in size. Virtual pastime of immortal earthlings called soliates, has irreparably distorted their human nature and aspirations.

When the speed advantage was lost, a very small amount of soliates who found the strength to awake from virtual sleep, and were later called the Creators, has created a rescue mission.

Chrono-technology enabled the Creators to make jumps to the future in the direction of travel of the ark, and give rise to colonies of descendants by the incredible efforts of will. Evolution on artificially terra-formed planets of the deep space had a fundamental impact on physiology and lifestyle of the colonists, so they became known as the descendants of people.

Over billions of years the ark has been making chrono-jumps to zero space generated by generations of descendants, thus compensating its lag in speed in relation to the expansion of the mysterious anomaly. The jump was being accomplished only if zero spaces of descendants and ancestors were crossing. And that happened when the ark came close enough (several million light years) to colonies once established. However, in the last generation of descendants the ancestors’ plan has been frustrated – events of the game take place exactly in this final moment of the history.

What is the problematics between the Descendants and their ancestors? 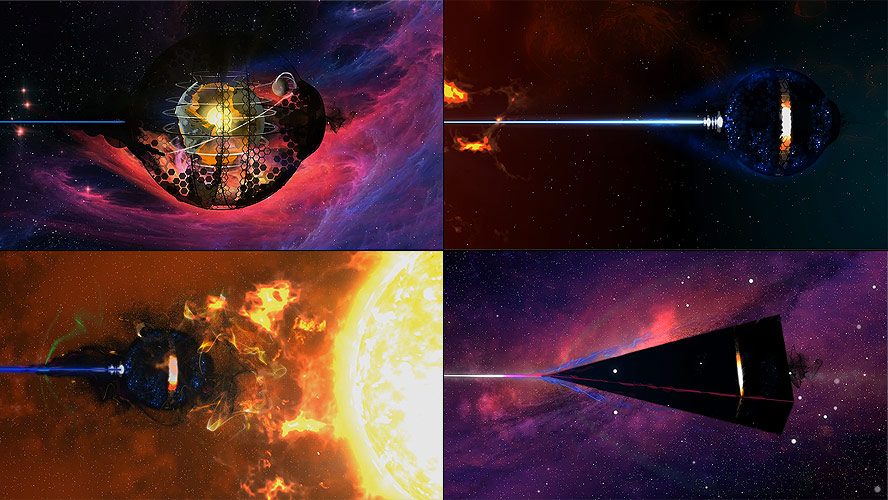 Descendants differ from their ancestors not only physically, and by the fact they are influenced by the paradoxical effects. Descendants live in the era of super-observers, quantum superposition. Their ideas about the nature of reality are not very different from ours, and most of the scientific advances are based on the gifts of ancestors, the nature of which is not clear to descendants, and artifacts of which they can see very dimly. Just as the Indians did not see ships of the conquistadors in the ocean until they landed on their shores.

In the face of imminent death, ancestors realized that they not only affected the reality, but also formed it. This has marked the beginning of the era of super-complices. This has fundamentally affected the lives of earthlings, and has separated their reality and its consequences from the colonists having developed in almost natural evolutionary way.

That is why many descendants do not want to meet with their forefathers - heralds of the Armageddon imposing the only way of salvation - the idea of a global escape and individual virtual paradise for everyone. Desires to retain the right to their own way are the cause of many conflicts among the descendants.

Technology of descendants is developed maximally - no one has questions ready to serve as an impetus for new inventions. Energy is in excess. Rare matter is the only value. All the lessons of history are before their eyes. Rebellions of artificial intelligence, mutations, genocide, clones - everything that could happen has already happened.

The universe of the Descendants is entirely different. And yet, the descendants are very similar to us, in contrast to the transcendental forefathers, who had lost humanity and the problem of choice. 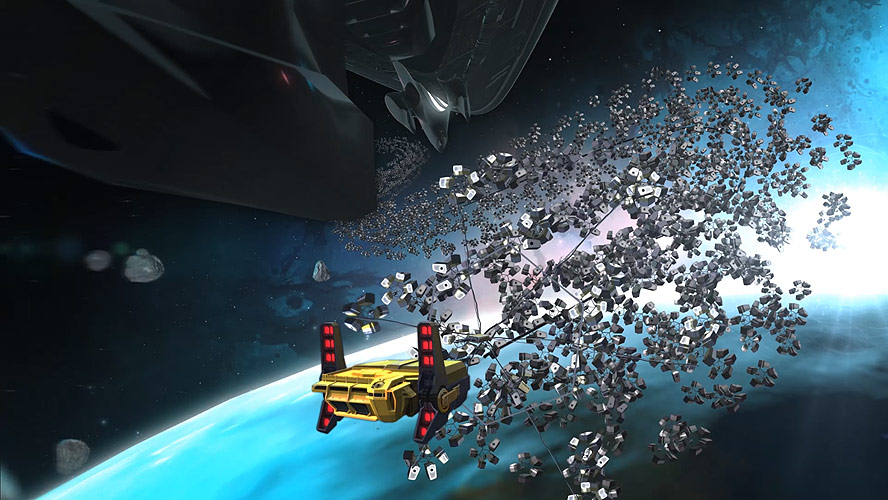 Of course that's not all, but if you are interested in this, then go to our site to be in the know DESCENDANTS, read new BLOGS or simply subscribe to my Twitter.

Tags: The history of the descendants gameplay ancestors and descendants paradoxes the reality of the last days
Like This:
text_twitter_share